The planning and building work of what was to be The County School, Hendon took from 1909 until it opened as a fee-paying school of 350 pupils in September 1914, just a month after the outbreak of the First World War. By 1927 the field at the back of the school was levelled and trees planted, and in 1929 building work on the gymnasium had started. In 1931 the intake of pupils rose from a two-form to a three-form entry, and by 1932/3 the extension on the north side of the original school building was finished to enable accommodation of 480 pupils. Former pupil Harold Whitlock planted an oak tree sapling in front of the entrance to the gymnasium in 1936 after being awarded a Gold Medal for the 50k walk by Adolf Hitler at the Berlin Olympic Games. The tree, known as the Whitlock Oak and sometimes erroneously referred to as the Hitler Oak, became diseased, and was felled in 2007. By 1955 the school had 600 pupils and 320 staff, and in 1961 the extension on the south side of the building, which included a new Assembly Hall, Dining Hall and kitchens, was officially opened.

When plans for the reorganisation of secondary education were passed by Parliament in the late 1960s, the London Borough of Barnet put forward, amongst other suggestions, the amalgamation of Hendon County Grammar School, situated in Golders Rise, with St David's County Secondary School for Boys, in St David's Place, off Park Road in West Hendon. This merger, unpopular with many, took place in 1971 when Hendon County became Hendon Senior High School and St David's renamed Hendon Junior High School. It was not until 1978, when all the new buildings on the Hendon County site had been completed, that the whole school became fully integrated on one self-contained site and called by its present name of Hendon School.

During 1987/8 the school was threatened with closure by the London Borough of Barnet claiming falsely that it was no longer a viable institution, but by 1988/9 the school had survived this serious challenge after being awarded Grant Maintained status by the Conservative Government. Extensions to the new buildings close to the perimeter on the south side of the site took place during the 1990s.

The school, a specialist Language College, currently has an eight form intake with over 1,300 pupils, 120 teachers and 30 ancillary staff as well as a Saturday Morning School for Languages with 200 pupils and 11 teachers.

In order to complete the picture it is necessary to mention how St David's County Secondary School for Boys came about. To explain this means going back to 1st October 1929 when Barnfield Senior Boys' School opened in Silkstream Road, Burnt Oak, Edgware with 267 boys. In January 1964 it amalgamated with Brent Secondary Modern School on its site in Sturgess Avenue, West Hendon. Brent Modern School, a mixed school, had opened on 7th January 1936 having been formerly inaugurated the previous October by Princess Louise, Duchess of Argyll and daughter of Queen Victoria. (There were three other schools in the area built to the same design - Colindale, Frith Manor and another unknown.) In readiness for the joining of the two schools new buildings were erected in St David's Place, off Park Road, and the two adjacent sites became one school named St David's after its location. Originally it was to be named The Grahame-White School in honour of Claude Grahame-White, the famous English aviator who had established Hendon Aerodrome, and who played a seminal role in early British aviation, but his widow was reluctant to give her permission for this.

Hendon School is situated in the grounds of what was Hendon House, probably built by the famous sixteenth century antiquary and topographer John Norden (1548-1625), although there is no conclusive proof of this. He was the first Englishman to design a complete series of county histories and geographies. Although the London Borough of Barnet has placed a blue plaque on the front of the original school building stating that the school was built on the site of Hendon House, research by Hendon and District Archaeological Society proves that this is incorrect as old maps of Hendon show the house as being between Golders Rise and Brent Street rather than on the other side of Golders Rise. However, the school is without doubt in the grounds of Hendon House.

The house then became the residence of Sir William Rawlinson (1640-1703), Lord Commissioner of the Great Seal and created Baronet in 1660, who is buried in St Mary's where there is a monument to his memory with an exceptionally lengthy Latin inscription. One of his two daughters married Giles Earle (1678-1758), a soldier, politician and wit and they lived at Hendon House where they had two children, one of whom, his son William Rawlinson Earle who died in 1774 aged 72, was buried with his sister in the church. It has been said of Giles Earle: 'His sordid nature and his broad jokes were the subject of universal comment, and his jests are said to have been set off by a whining tone, crabbed face and very laughing eyes.' It is unclear how long the house stayed in the possession of the Rawlinsons and Earles. However, in the 1790s it came into the ownership of John Cornwall, said to have been a Director of the Bank of England.

There are references to the house being rebuilt in the nineteenth century but this may have been no more than renovations and additions to the original building.

The British census of 1841 shows the house as in Braint Street and occupied by Charterhouse educated Major General Christopher Fagan CB, a fifty-five year old retired soldier who had served in Bengal. With him was his wife of thirty years, five children and eight servants. His son was killed in action in 1857 in Delhi during the Indian Mutiny. The Major General left in 1843, but it is not known who succeeded him.

By 1861 the house had become a private mental institution for ladies described as 'lunatics', with 12 staff and 14 patients run by Charles Dence. Ten years later there were only 11 staff with 9 patients

Then by 1881, the new owner was Major Ardwick Burgess, the eldest son of Henry Weech Burgess, a prosperous Lancastrian whose house, Temple Park, was on Hampstead's Temples Estate close to the borders of Hendon. Ardwick Burgess, who had been made Lieutenant in the Queen's Own Light Infantry in 1853, married in 1871. His wife died and he remarried in 1881. The Times of 6th April 1886 reports the birth of a daughter at Hendon House. In 1909 Burgess sold the house and twenty-three acres for £15,350 according to The Times of 20th May 1909, after which the beginning of a new era and the building of The County School, Hendon, took place. 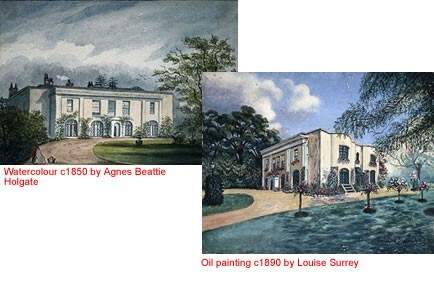 History of the School Logo

The Lamb and Flag

The Knights of St John of Jerusalem used to own land in Hendon, hundreds of years ago. The lamb and flag was their badge.

The lamb stands on a hill, as a reminder that Hendon was originally a village built on a hill, and in Anglo Saxon times was called Heandune - meaning "high hill" or "high down."

"Omnia discendo vinces" - "by learning you will conquer everything" - is the noble idea which has inspired our school community from its origins.

Effective learning gives students skills for life, and prepares them to make the most of the opportunities and challenges which lie ahead.